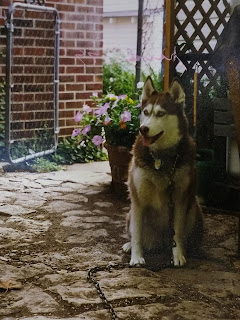 I don't know who took this photograph. Maybe I did, maybe it was my wife. Though it could have been earlier in the timeline, and Leslie wasn't my wife yet.

There's information in this image. That face is supremely alive and invested in its world. No other dog that I have known has ever been so aware of her surroundings. The brick wall is free of ivy because Roxie decided to gnaw the weedy vine off at the ground. That 4-foot fence and gate weren't obstacles. That's why the heavy-duty chain is attached to a don't-shit-with-me pinch collar. Yes, that sounds horrible, but we live a short city block from a busy 4-lane road, and not only could Roxie have been killed or maimed, she could have precipitated a crash that would have hurt innocent people. And even those Medieval devices weren't perfectly reliable. Pinch collars broke every year or two. And that giant chain eventually wore out at the swivel. Roxie liked to pull and test and pull and test. A thousand shades of stubborn. That was my dog.

I wrote one story about my dog. "Roxie" was published in ASIMOV'S not long after she died.

I just reprinted "Roxie" as a Kindle book.